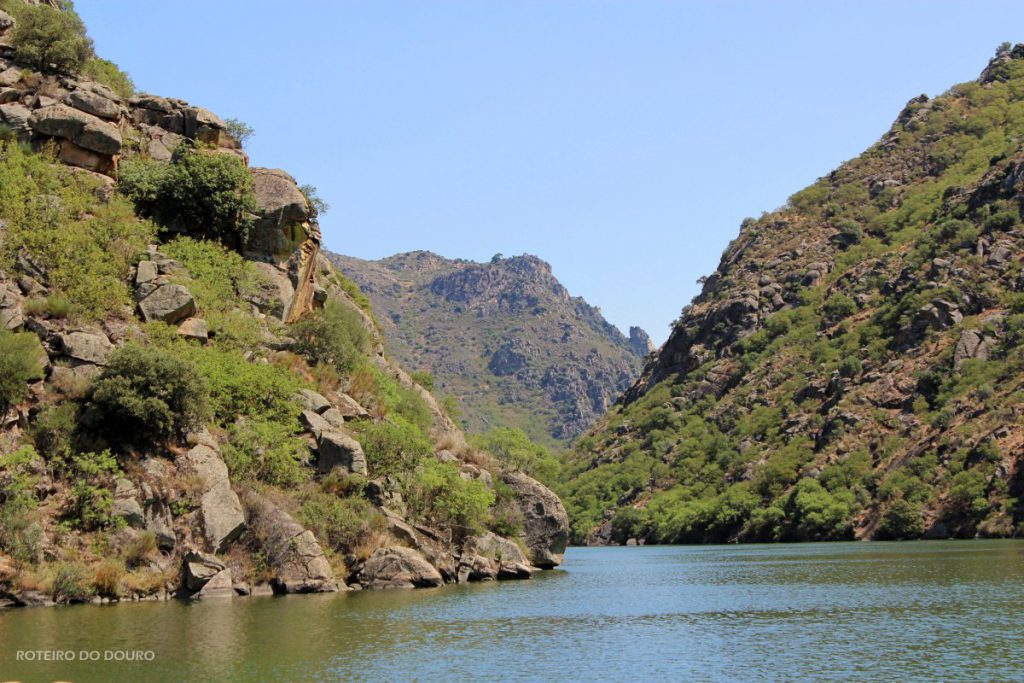 Boat trip on the International Douro, between the Congida fluvial beach and the Aldeadávila dam.

On this route we will get to know the International Douro. We leave from Congida River Beach, about 2km from Freixo de Espada à Cinta, and head up the Douro River, navigating through the reservoir of the Saucelle dam. We pass through La Barca, a Spanish village, and continue until we get close to the Aldeadávila dam. We then make the return journey.

On this route we observe the wild Douro, the fauna and the flora, in a place where only the noise of the boat engine interrupts a nature practically untouched by man. It is a very beautiful region, where cliffs and birds of prey mark the landscape. A tour we highly recommend.

See the boat trip below.

We start this tour at Congida River Beach. It is a 2h30 cruise on the reservoir of the Saucelle dam that goes upstream to near the Aldeadávila dam.

The river beach of Congida is located near Freixo de Espada à Cinta. Besides the river beach, there is a picnic area, children’s playground, swimming pools, a bar with terrace by the river and several shady areas.

The cruises depart from here and travel along the Douro River, taking about 2h30. The river operator, from the company Congida – La Barca, is a Portuguese-Spanish partnership.

The boat waits for passengers docked at the Pier. It is a medium-sized boat, with a capacity for about 40 people, has air conditioning, bathrooms and a small bar. At 10:30 sharp, the crew arrives and boarding begins.

The journey starts upstream. Next to the pilot we have two doors that give access to the outside of the boat, on a small deck that is ideal to take pictures for the beautiful natural landscape that we will find.

In conversation with the pilot and looking at the instruments, something catches our eye. The Douro River here, although relatively narrow, has a huge depth of about 70 metres!

The boat continues upstream. The banks are full of vegetation and we can observe a significant difference on both banks. On the Portuguese side we find vineyards, on the Spanish side only wild land.

As we approach La Barca the river seems to have no continuation. We can see the Pier on the Spanish bank, and on our left side we find a Rock called Embarcadouro do Douro, a place where in the past the river was crossed clandestinely.

When we arrived at La Barca we stopped to take some passengers.

We continue upstream and the river banks become steeper. It is not by chance that the dams on the International Douro were the first to be built on the Douro as the river between Miranda do Douro and Barca D’Alva has a gap of about 3 meters per kilometre, the highest gap on the whole length of the Douro. 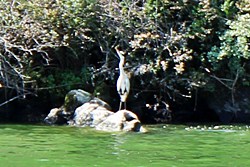 On our right hand side (Spain) we find Monte Godim, and start to see wildlife. The first is a Heron, which is perched on a rock right next to the river. 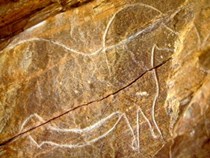 We continue and pass near the Portuguese village of Mazouco, where a famous Palaeolithic engraving, the Mazouco Horse, has been discovered.

On the Spanish bank we find a vast forest of nettle trees. It is difficult to describe this landscape in words, a wild and very beautiful nature.

We then enter a part of the river where the cliffs become steeper, and the river becomes narrower. We pass a pine tree, the only one on the route that rests on the river bank. Then to our left, on the Portuguese bank, the tour guide draws our attention to a waterfall. The water does not flow, it is very hot and there has been little rain, but we can see the water marks on the rocks.

Shortly afterwards we began to see birds of prey. Eagles and vultures fly above the river and the boat, landing on the banks.

For birdwatchers this is a great place! Here you can find Golden Eagles, Griffon Vultures, Egyptian Vultures, Black Storks, Herons, Peregrine Falcons among other species.

Suddenly the small outside deck of the boat becomes small, as all the passengers want to take photographs and with binoculars observe the birds flying above the boat.

Some time later the boat stops, silence envelops us… it’s time to turn back. We are close to the Aldeadávila dam and the boat is not allowed to approach the dam. 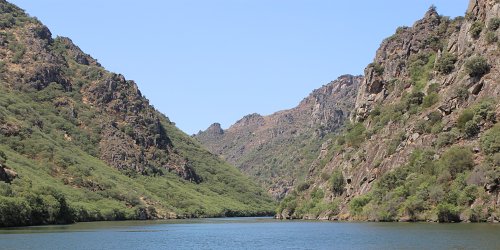 The way back is quiet and allows us to observe more details of the landscape, fauna and flora of this region.

We arrived in Congida at 1pm. The sun reflects off the river forming a silvery surface. It is an excellent end to a beautiful tour in the International Douro.

This site uses cookies, by browsing you agree to their use. Learn more.